When hurricane Irene came, DH and I argued about whether to duct tape our windows or not. Irene did affect our lives, though not by flooding our apartment in Harlem: we got bored, we drank and we probably conceived L then.
When hurricane Sandy came, half of Manhattan turned pitch black and was flooded. In our small apartment, a different type of storm was causing havoc.
Here is the tale of perhaps the longest week in my life.

Rosalie, our nanny, took a day off for the Tabaski holiday (African term for the Muslin Eid holiday) so I had to fend off my very petulant twins while L was at our emergency day care center. Obviously they did not get their morning bath and the TV was on for a good two hours in the morning. I did wake up with very good intentions though: I was not going to lose my temper, I was going to enjoy every minute of it, I was going to take them to the museum, I was not going to hog my iPhone all day etc. Then it turned to hell. I cannot even remember how, when, why. But I do remember thinking: ‘Boy, I, really, really suck at this whole mum thing’ while checking my Facebook status. Meanwhile DH left a voice message on my phone: ‘Darling, I want to warn you about a tragic murder in Upper West Side (few blocks from us). An horrific story about a nanny killing the kids she was taking care of and then trying to kill herself… I know it is going to freak you out so I wanted to warn you before you read about it’. So I read a NY times article and it did shake me to the chore. I felt empty for the family. And then I started to read the comments: some mothers called it a ‘9/11 for families’ while others called selfish, mums who have to hire strangers to take care of their own children. I felt angry. However the more I was reading the more I was feeling hurt. I was disgusted by these people blaming yet again women and mothers and planting (momentarily) in my head some seeds of doubt about my lifeline, our nanny. Yes I was pissed off big time. That’s when I heard for the first time about a Hurricane moving towards New York. They called it Frankenstorm.

I was so getting plastered…

Day 2: Why karaoke is not for the kids

I woke up with pain in my wrist. I have a feeling that this pain occurred when I was singing the Phantom of the Opera with DH at 3am, with our kids as audience. The kids woke up minutes before we got home from a bar crawl with Thor. Sensible parents would have put them back to bed. But we were all ‘Let’s have a blast!’ and danced and sang to show tunes, queer approved songs and Michael Jackson essentials. G was spinning, jumping, shouting at the top of his lungs holding a pretend play wooden spatula. L was sitting on the couch jamming on a tambourine and for a 6 month old baby he was sounding pretty good. He did look scary; in fact he looked like a Chucky doll stabbing someone. As for P, she was rather unimpressed by our demented performances but tagged along. She understood that you don’t get to choose your family. DH and I thought that an impromptu slumber party would help the kids wake up later…Stupid idea, wrong planning. Instead, they woke up chirpier than usual. The pain in my wrist thus became the least of my concern; my head kept spinning all day because of the screaming, the tantrums, the ‘TV please’, ‘TV please’, ‘TV please’… And in between heart palpitations and pain killers, I learnt the name for the hurricane: Sandy. I could not help thinking about Grease. A Hurricane named like a Olivia Newton-John character cannot be scary, can it?

This year’s Halloween was supposed to be great: the twins were old enough to enjoy the festivities, I was not pregnant so I could finally wear something else than a parachute or a pregnant nun outfit .This was last year’s costume bought by DH which I refused to wear. I am not religious but it was too disrespectful, plus we do live in America and I was completely paranoid that religious conservatives would stab into what they thought was a fake pregnant belly…Yikes. Anyway this year P and I were going to be the White Swan/Black Swan duo. But she refused for hours to wear her tutu until she realized that G was proud to be my understudy Swan, doing spins like a little ballerina. Note: Thor and Archibald always said that G could never be gay because he was throwing balls too well and was playing too rough. However he does love to wear tutus, he is obsessed with Glee and he keeps asking me to tell him he is pretty. Interesting.
The building Halloween party was fun despite the fact that P got completely freaked out by some older kids. I must admit that the kid wearing a mask with fake blood streaming down his forehead while carrying around a bloody knife was unsettling. For about 3 days after that P kept saying: ‘A-peur Ha-ween’ ( ‘Scared of Halloween’). Cute to start with, super annoying after the 50th time…Meanwhile you could feel the weather turning and I was starting to feel jittery. DH’s laid backness was getting annoying too:
Me: ‘Should we go and buy non perishable food?

DH:‘Don’t we have tins left over from Irene?

Me: I should probably fill the bath tub with water, right?

DH: If you want.
Arrrrgggggghhhh. To be continued. 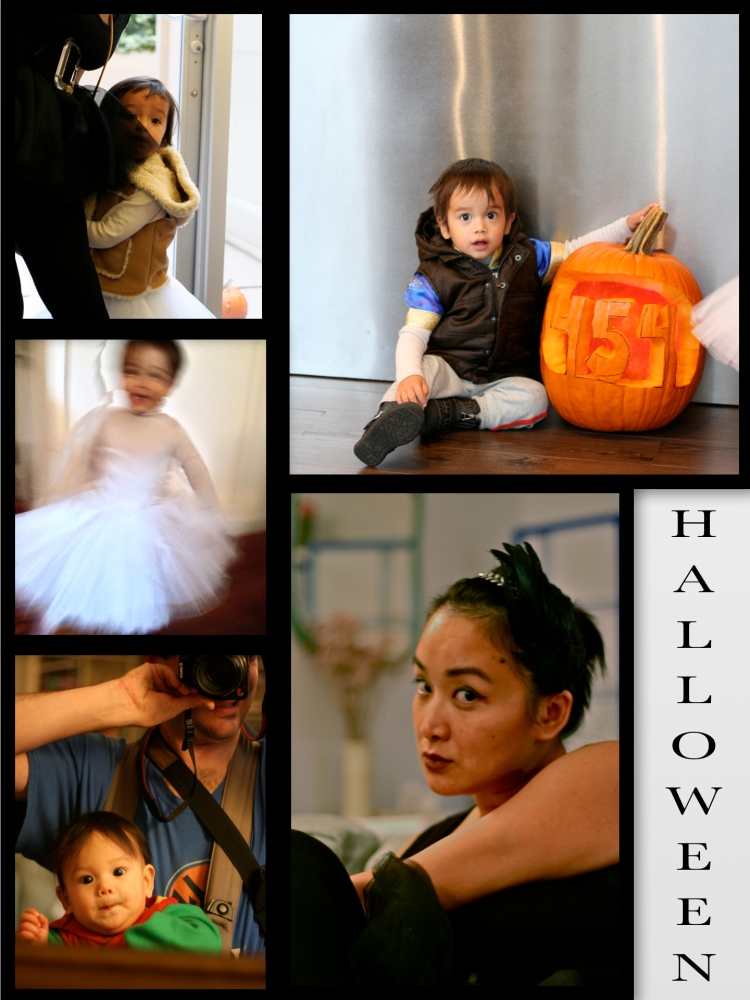 2 thoughts on “Hurricane Sandy aka Frankenstorm – part One”