It is weird that I never did a MOTD post on color combos because I have been obsessed with color blocking since I was 6 year-old. Of course back then, my classmates thought it was color blindness not color blocking…. Idiots.

This morning, I was in a rather happy mood and decided to go for a daring combo of petrol green and red which may well lead to a ‘hello, Mrs Christmas troll’ reaction but hey who cares? It is #NYFW after all and everybody has moved to Lincoln Center and whereabouts to watch some eye candy and fashionistas strutting around with much swag (yeah!) and self-awareness (yikes!).  I read somewhere that (stylish) peeps get paid for just walking in the street (and no, they are not hookers) in the hope to catch street fashion photographers. So I am basically safe and sound here up in Harlem.

– Petrol green faux leather leggings from Caribbean Queen which I thought I would never ever buy from because 1- I cannot help feeling like an idiot/fraud wearing anything called Caribbean Queen (I mean, seriously only Rihanna should be called that), 2- I am way too old to wear their stuff, 3- their aesthetic is so not mine (floral prints, nope, nope, nope)…but as I always say, one should never hold a prejudice (especially when the stuff is on sale) ….Well, after 2 weeks of trial the verdict is ‘I LOVE these fucking leggings!!!!’: my legs almost look like pre-kids legs! I still should not bend but I will take any small victory 🙂

– a navy turtle neck wool dress by Theory, which is one of my ‘grown up’ go to outfits

– a hand beaded sans cuffs leather bracelet that has a very place in my heart. I always feel so humbled when I wear it because it was designed and made by my cousin 30 years ago. The bracelet was her final project for her embroidery and fashion techniques qualification. A year before she had dropped her accounting studies much to her parents’ dismay because she sat down in the Parisian metro near a woman who was hand weaving and told her to check out her Fashion institute. Followed her heart and passion. After her graduation, she went on working for Maison Lesage …and Jean Paul Gaultier, Karl Lagerfeld, Nicolas Ghesquieres etc. #mostinspiringjourneyEVER

– and because it is ‘brain freeze’ cold season in New York, a white wool hat purchased during summer on a Philipp island off the coast of  Australia. My shopping habits are so random. 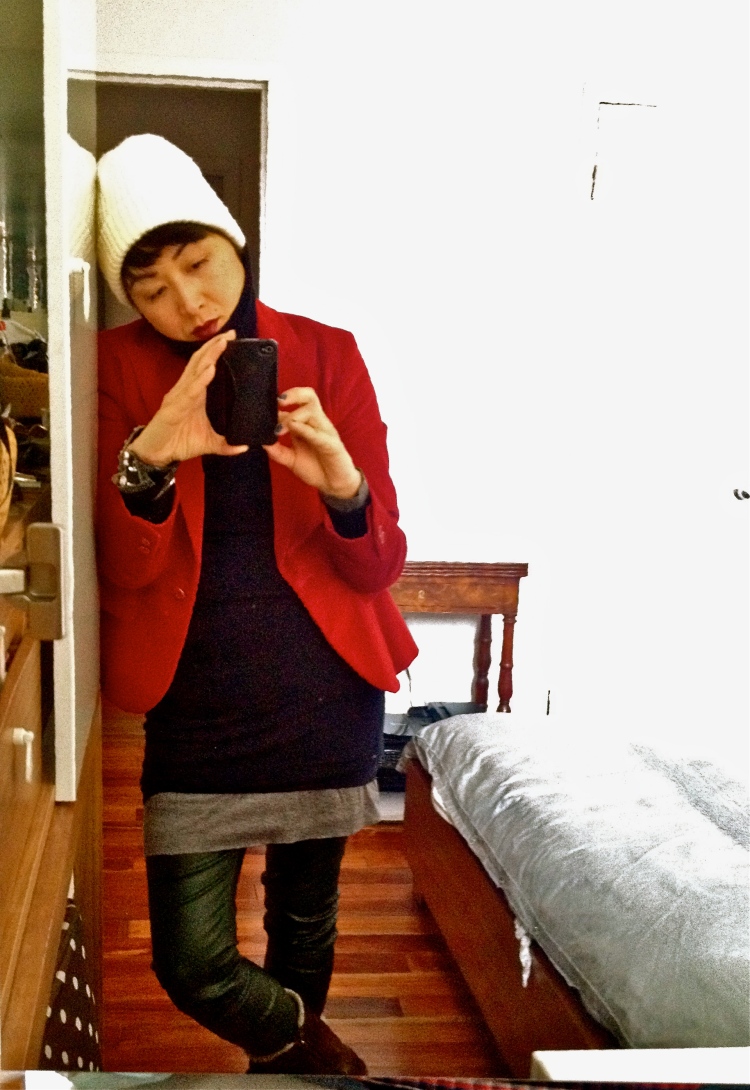 2 thoughts on “Mood of the day: lady LEGO”