This is an unusual post because it is trying to skim through what has been a helluva two weeks. It feels as if I had been fleshed down to the bones. And as I am slowly putting back my (protective) layers one after the other, I cannot help but feel slightly at loss. I realize that I sound as if I have smoked some crack or started moonlighting as a call girl. What I am trying to say I guess, is that I have been striping bare my emotions’ barricades and this uneases me. It seems totally paradoxical since I am writing a fairly voyeuristic blog (with its own load of family pictures and dirty secrets). But in real life, I like to keep my emotions in check or at least I try, when there are people watching. And I totally failed to do so last week.

Here was the context: a one week long celebration of 2 joint birthdays (your very own redlipstickmama and her ‘twin’, DH), 3 joint Catholic baptisms (G, P, L), a reunion with BFFs from Australia after almost 3 years apart and a reunion with FiLs (Folks in Law) from France after a somewhat intense last encounter this summer. Can you already see a meltdown in the making?

So many raw feelings…And now that all is done and has gone, I feel empty. I thus have a total writing BLOCK. I really started to freak out and thought:‘is that it? Is this all I got in me? Am I getting sick of ‘hearing’ myself talk/rant?’. I also wondered: ‘If Natasha lived here, would I need redlipstickmama?’.

I feel purposeless. Not unlike my basketball team actually, the New York Knicks, who have an atrocious start this season: they are uninspired, lazy, tedious, and I bet frustrated. I thought I would do a recap of my last 2 weeks a la NBA game recap. And maybe the Knicks and I can then both get out of this streak.

FINAL SCORE: 2 and a half baptized children, 2 (at least) birthday celebrations, 1 karaoke night, too much way too much food and booze, 60 candied almonds boxes handmade, 60 people lifting us during the kids’ christening, 7 handmade flower arrangements, 4 hours of sleep a night, 1 screaming fit, …and tears, enough of them to last until…the next round of sleepless nights I guess.

The catholic church in Harlem where our kids were baptized is still standing and did not burn despite the fact that:

– and the baptized children tried very hard to strangle each other during the pastoral sermon…over cheerios.

Also, L might not be completely baptized because I had to flee with him after 1h45 of religious service. The poor child could not take it anymore. Turns out that unbeknownst to  me, he thus missed the lighted candle part i.e. the promise to renounce evil. This is slightly worrying since out of of our 3 children, L is the one who most displays the traits akin to an underworld kingpin: chubby, charismatic, remorseless, bully etc.

Finally, Natasha and I should still never be allowed to get dressed together. Both our DHs would agree to put a lifetime ban on this.

The friends. You think you have some and then you know you have scored great ones when they slave all day to cook a stellar birthday dinner from scratch, clean your house, set a beautiful table and treat you with a spa massage (childcare included). Yep I teared up a little a bit.

During a wild karaoke night at Thor’s and Archibald’s, the doorman, after probably some complaints from the old cranky neighbor below, called in and said:

‘Hi it’s Dominic from downstairs. There’s some loud music apparently on your floor. Is it you guys?

To which, Thor (genuinely) replied: ‘No, we did not order Domino’s pizza. Thanks.’ before hanging up…

No comment on the amount of Cosmopolitans and Lychee-tinis consumed that night.

I guess I was simmering deep down: the stress about the upcoming baptism as the list of attendees was growing and growing, the anxiety about our Aussie friends soon leaving to go back to their sunny skies, swimming pool and of course beautiful kiddos, and the energy required not to react to some of my in-laws’ comments about the kids. And then of course in the middle of the week, I snapped like a demented woman, as I do…occasionally.

It all started funny: Jacques my father in law (FiL) was having a childish argument with his 19 month old grandson, L. It became snarky when FiL made an off the cuff remark about how apparently ‘in ‘this’ house, children are allowed to touch EVERYTHING, anyway…’. It then became awkward: I started to bark ‘oh yeah, what does this mean???? You know what, you are right I am going to freaking put these kids in CAGES, all of them in freaking CAGES!!!’. It ended completely crazy like a scene of a Tarantino movie when bullets are fired super quickly and then explode in slow motion making a whole bunch of Yakuzas bleed to death. In other words, I lost it like a tot having a tantrum and I threw some kind of cubes on the floor except that it was not the floor I hit …but my freaking MiL (mother in law). That’s right, my MiL! And I used to be their favorite ‘brought into the family’ person. God knows what they’ll say behind my back now. Oh well…At least the air got cleared out. Everyone was whispering after my outburst – scared to death I might stab someone. Very quiet house.

‘You are sooooooo boring!!!’ dixit Natasha who refused to leave the dance floor of the Red Rooster downstairs club. We were all drunk and all tired but she was adamant:’You are so boring; just leave me here!!! I’ll find my way home.’ That’s when I looked at Anthony, her DH, and told him: ‘Do you think we can smack her so she loses consciousness and then carry her into a yellow cab?’ I got worried when he thought about it for 5 minutes before cooly stating:’Not sure we would get away with it.’

Can I set the record straight right here, right now? I am many, many things but no one has ever called me boring. EVER. Crazy woman that Natasha 🙂

The amount of love we felt when parading our children down the aisle in the church. I did not get married in church so I must admit I got overwhelmed about the waves of positive energy, the known and unknown friendly faces popping up here and there, the soft touches on our shoulders as we passed by. Our (or should I say DH’s and the kids’) local catholic community is actually awesome! So Harlem too: full of laughs, humor and energy!

6 (then sober) adults standing (2 parents and 4 god parents) supposedly minding both spiritually and practically  3 kids in the Church but somehow L managed to fall flat face on the marble steps, cut his eyebrow and bled a little right just before receiving the Holy water…Did I mention L also being the one half-baptized? In the eyes of some, this kid is probably screwed. Attaboy 🙂

I might have developed a crush on old Pastor Nolan. He is such a sweet and simple man and did not seem to mind that I am not a Christian and swear like a truck driver.

In the midst of all this drama, I had two notable encounters with the glitzy crowd of New York that you might find funny and/or obnoxious of me. But hey…I am in the middle of a writer’s block, so yep I am going to do some name dropping. So, at the Red Rooster, handsome and brilliant chef Markus Samuelsson went out of his way to congratulate Natasha and I on our style and to welcome us personally to his restaurant. He served as guest chef for the first state dinner of the Barack Obama presidency. His hand that touched my hand touched the hand of BO! Completely dork-ed out by this fact. That was my VIP moment of the month.

My second encounter was less glamorous and more VAP (Very Awkward Person). During a work meeting, I created a commotion by banging my forehead against the marble bar countertop (what is it about the marble and my family???) leading the barman to apply some ice on my head and all this witnessed by a very calm Meg Ryan casually eating a soup behind me…Meg Ryan=laid back, Redlipstickmama=prima donna

1- Devise a plan for Natasha and Anthony’s family to move over here. Maybe when their children get over their ‘we love the sun and the space’ phase and get New York brainwashed by all those shows and sitcoms claiming that a shoe box studio here is way better that a sunny villa with swimming pool…hum.

2- Find what religious materials my in laws left in our apartment to guide us guide the kids towards God. So far
we have: a nativity scene (very cute one by the way), a bible for children, a book on baptisms, an Advent calendar…I am so going to check under my bed for a statue of the Virgin Mary.

How was your week?

Below amazing pictures from talented Helene, our photographer for the day who captured so beautifully this special day. Check out her stunning work on her site. 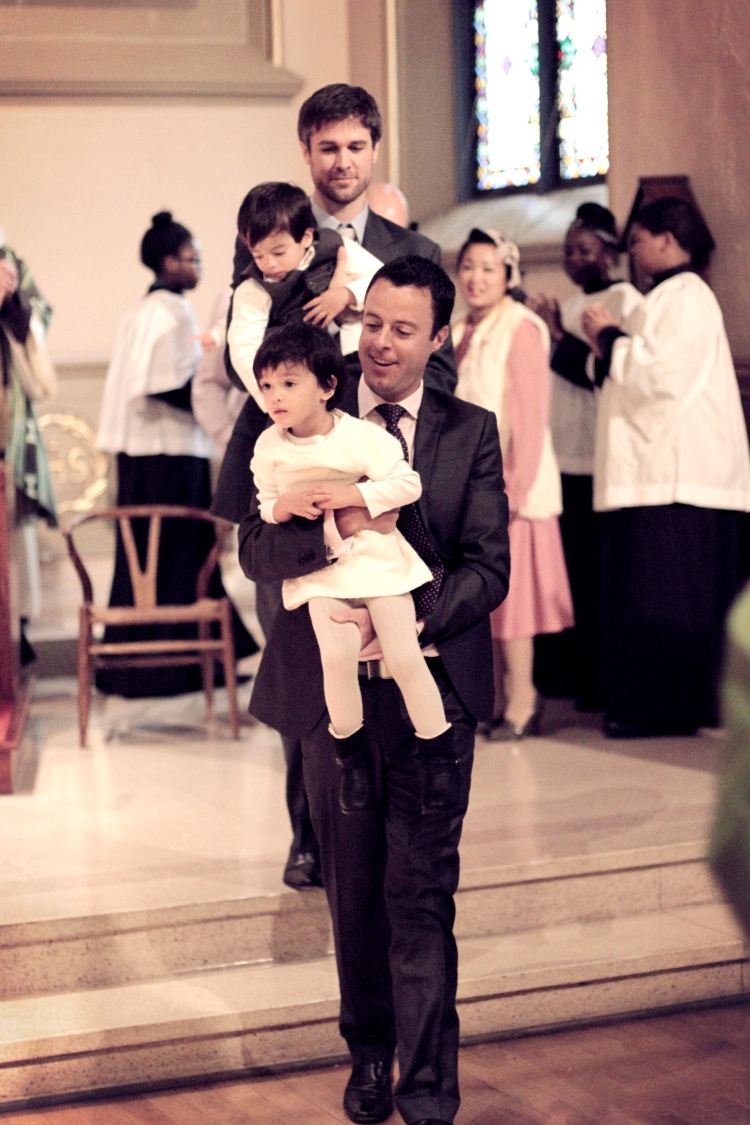 8 thoughts on “Love, God, the Knicks and (losing my) marbles”