Very strange weather. Last week I was boasting about New York’s Indian Summer to all my European mates and this week is a mix bag of rain, thunderstorms and tornados alerts, Fall breeze, hot and sunny afternoons etc… As the French say, ‘c’est n’importe quoi!’ (It’s anything…and everything). So I decided to just mix Summer and Fall:

– my favorite summer jumpsuit from United Colors of Benetton. It is as comfy as pajamas. And it has helped me a lot to hide my bump in the early days of my pregnancy with L, after I gave birth to L and …now.  Yep, it is kind of the same bump, and it looks like it is here to stay, the kids even named it. They call it ‘LE BEBE’ (the baby)…

– my mint pumps from Nine West

– and my most precious item of clothing: a trench coat from Louis (Vuitton) that I literally snatched away from some skinny gal during a sample sale (back when my cousin was working for LVMH). I am not proud.

Every fashionista has read at least one article or two about French women’s (supposed) natural and effortless chic. My little brain went French woman + scarf + trench coat = BINGO. Except that how effortless chic can you really be when you can no longer freaking close the trench coat???? Oh well…

On a side note, I met up for a coffee with Lou, a childhood friend from France, who was visiting New York with her hubby. We haven’t seen each other in about 18 years and it is was shocking how easy it was to just pick up the conversation and run with it. Great feeling. It was also funny to talk to someone who knew you as a child and as a teenager but then missed your adult years because they say things like:

–‘It’s hilarious because I would not have pictured you with a husband and 3 babies. You were so adamant about not getting hooked up with anyone, so independent!

-‘Back then you already seemed rather unaffected by shitty stuff that would happen around you, like floating above the crap.’

I guess I did change but not so much 🙂 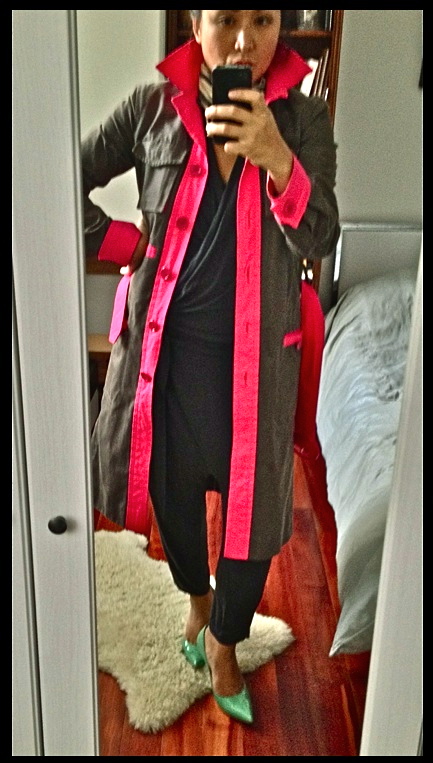 6 thoughts on “Mood of the day: the Frenchie”