As I was waiting for someone to help me get my stroller down the stairs at the Rockfeller Center because the elevator to the platform was down I saw one poster announcing a new show on NBC: ‘the new normal’. Intriguing. 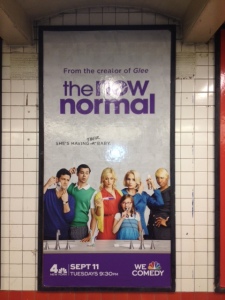 ‘The New normal‘ seems to be about gay parenthood via surrogacy. National broadcast is catching up with societal changes – or at least societal changes in big cities. I wonder how it is going to be received in that land they like to call middle America. In my life, the word ‘normal’ – especially when it comes to family- does not have a place.

For the last 20 years I have lived far from my blood family. DH and I thus had to reconstruct our support network and new family in Strasbourg where we studied, in London where we moved in together and here in New York where our kids were born. It is kind of a survival strategy. The plus side is that this chosen family is not going to tell you – at least in your face – how fat you are and how you ruined your career because you breed like a rabbit.

I chose a gay couple as god parents to G and P. It was partly a selfish decision since they swore they wouldn’t have children on their own so there was no risk of having their attention spreading thin there. But mostly because we never once thought about their sexuality when we asked Thor and Archibald to have this special place in our kids’ life. They were just the best for the job. Full stop.

Homophobia and gay bashing are still a sad reality but in the microcosmos that is Chelsea New York gay dads are being fawned over. In fact when G & P as babies were in a Baby Bjorn being carried around by DH and Archibald, everyone would stop, compliment, encourage them and look at me as if I was the surrogate mum/nanny from the Philippines. Thor and Archibald became so vain that they started to coordinate their outfits with the twins to multiply the cuteness factor when they were on babysitting duties. Twins = best fashion accessories ever.

The other reason they are the godparents is that they have a cool child crap free pad in Chelsea to crash in when they are crazy enough to do a life swap with us. What is a life swap? For a week end Thor and Archibald come to our place to play house with the kids, get sleep deprived, get thrown food on their faces, change diapers and lose their minds. Meanwhile DH and I get to…sleep. What amazes me is that when we reluctantly come home, the place is spotless and the kids are super well behaved. I did ask:’ Who are these angels and what have you done to my kids???’. It slightly pisses me off that gay couples may well be wealthier, more stylish, definitely fitter and possibly better parents than straight couples.

I have never been more proud that when G & P saw bits of a tender scene from ‘Patrick, age 1.5‘, a swedish movie, where the gay lead couple kisses.They immediately said smiling: ‘Oh, Tontons!’ Tontons is the French diminutive for uncles in French. I do recommend the movie. It is the first time I thought that the lead characters could have been straight and the plot would have been the same. It did not over dramatize the fact that it was a gay couple. That was progressive film making.

As for the NBC show, I am always very weary about how such daring idea unfortunately could become a compilation of easy stereotypes. However the creator is the Glee’s guy and a conversation with my 17 year old niece Alice opened my eyes. She said:’I know it sounds stupid but Glee really made me think differently about gay love and relationship, gay bullying etc. Where I live I don’t get to see openly gay people so the show is a window to this world. I am so rooting for Brittany and Santana (the lesbian couple)!’

So I will watch ‘The New normal’ – I still hate the title though – and will probably get over emotional.

PS: I did eventually get help to get to my train platform. Again I was helped by another mother of two! Every single freaking time! What is wrong with you male New Yorkers??? I won’t tell if you start panting and sweating while helping me carry my stroller…so man up.